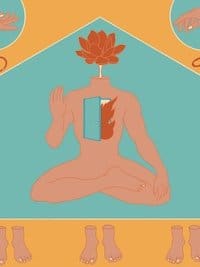 A playlist of resistance

The burning forest suffocated the earth. You can read some stories in a cloud of thick smoke. One day they caught some people who burned the forest, only to go to jail for several months. Why does a sane person want to burn the forest, nobody asks, silent. But of course, everybody knows, a corporation (stronger than the country) asks somebody to do so, the land needs to be ready for the next cultivation. Some bandits kill people in the village, police have caught the murderer, case closed. Next, the village became the palm oil field. It’s such a powerful enemy. Acts of Violence only used by a smaller and stupid landlord, killing down the local identity and its cultural aspect is a more perfect tactic. By that, no one will resist in the future.

But of course, these are not new stories in the history of industrialized food. The food industry, if you control it, allows you to practically control anything. And how can we resist? No chance! Should we switch to more organic food, or only buy from the people we know? Maybe. But now we are in the moment of crisis, with not so much food available. Should we boycott the company that is responsible for this? But for how long? If the company is bankrupt, only workers and farmers will suffer.

Back in 1830, Johannes van den Bosch (Governor General of the Dutch East Indies/Indonesia) introduced cultuurstelsel or cultivation system. Here, a farmer had to plant one-fifth of their rice field for the cultivation of such export crops as coffee, sugar cane, and indigo. If you didn’t have land, you could work in a government field for one-fifth of the year (66 days). In the case of crop failure, farmers were left responsible, falling into eternal debt. This cruelty stopped in 1877, but cultuurstelsel was a mountain of gold at that time.

Coffee on the other hand, came from Ethiopia. Somehow in Indonesia, it grew naturally and developed into hundreds of variants. But none of us knew these variants before. We grew up with very low-grade beans that had to been sorted or did not pass quality control. These were bad beans – moldy and needing to be roasted it into black, totally bitter-tasting coffee.

Now, it slowly changes. The younger generation has learned about the diversity of coffee, what good quality is, and what makes good coffee. Many cafes and coffee shops with Indonesian specialty beans have opened, trying to build a new coffee culture. More people are giving support to local products. Local farmers have also upgraded themselves, for better knowledge of planting, processing, and selling their products. The ritual of coffee, like coffee wedding rituals or various offerings, are still kept as part of the movement. After years, it is a success, we can claim coffee as part of our culture. Now we have 1.2 million hectares of coffee plantations. While most of it still belongs to multinational companies/government, at least we provide a good cultural competitor on the global scale.

Culture, what a perfect strength. I’m not surprised that many suppressors prefer a cultural approach, it is more powerful than violence. Class-making is also part of this approach. Some classes in society have limited access to education and the economy, especially in regions where natural resources are exploited.

Coffee is a lucky story, others are not so fortunate. The colonialism concept never disappears from this world. Why does Indonesia have so many forms of cultural resistance? Because they know that they can’t win the war in a direct manner.

Slowly and joyful, they march into the future.

Yennu Ariendra aka Y-DRA is a music composer, producer, musician, DJ and digital artist who works in the area of ​​music, performance and also visual. Almost all of his works depart from the values ​​of tradition and history in Indonesia, Java in particular. The methods of creation also involved a Javanese cultural approach, such embodiment, and instinctive expression, which intertwined between local and global, past and present, local and global. In his previous works, He departed from the strong practice of traditional art, ranging from music, dance, performance, visual, and rituals, and put them in a new critical narrative and then recreate/re-translated them in contemporary forms. Y-DRA No-Brain Dance album inspired from Dangdut Koplo, Dance Music that grows and develops in Indonesia, especially in Java. Raja Kirik “Rampokan” is his latest work View all posts by Yennu